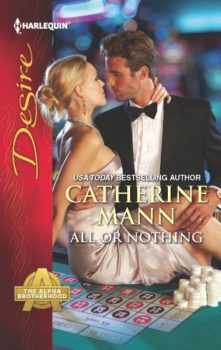 “I can’t sleep with a man who keeps secrets.”

Despite the warnings that he would break her heart, Jayne Hughes fell for the bad boy. And Conrad Hughes, casino magnate, did just that with his absences and lies. Now she’s ready to move on, but her husband has other plans….

Conrad’s undercover work for Interpol destroyed his marriage. When Jayne comes to Monte Carlo seeking a divorce, he launches an all-out assault. Seducing his wife back into his bed is child’s play; earning her trust is another matter. Yet Conrad knows the odds favor the house. And he has no intentions of losing.

Other Books in the The Alpha Brotherhood Series