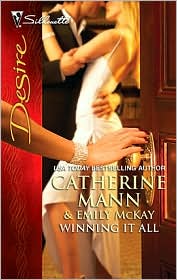 This summer, enjoy twice the scandal in this compelling anthology!

“Pregnant with the Playboy’s Baby”
by Catherine Mann
Meet the shocked father-to-be: Nicolas Valera had indulged himself with society gal Vanessa Hughes, knowing it would lead nowhere. But the Argentinean was more than tempted to persuade her back into his bed. He never expected their torrid affair would result in a surprise pregnancy.

Romance Reviews Today says, “Emotionally charged, Catherine Mann’s Pregnant with the Playboy’s Baby is proof that love conquers all and is a nice way to start off WINNING IT ALL.”

Cataromance Reviews says, “Catherine Mann creates stories with genuine emotions which will touch your heart… ‘Pregnant with the Playboy’s Baby’ [in WINNING IT ALL] is intensely emotional with heartfelt sentiments plus plenty of fierily passionate encounters!”

by Emily McKay
Stepping up as the fake fiancé: Connor Stone could not forget his one night with Brittney Hannon. And when they were unexpectedly reunited, he had to have the senator’s daughter once again. Yet Brittney had to avoid all scandal…forcing Connor to play the role of pretend groom.