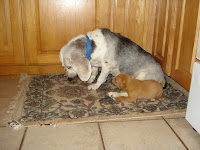 Hey there, folks… I wrote this blog entry a couple of months ago, but wasn’t ready to post it. I finally decided I would probably never be ready and decided to go ahead and post it now. Thanks for letting me share…

Life is funny sometimes in how we pray for one thing, only to get another and then find it’s what we really needed all along in a way we’d never expected. Wow, how’s that for round-about circular reasoning? Let’s try a linear approach and start at the beginning…

My four children and I adopted Trooper – a big ole lovable beagle/basset mix – from the Humane Society in Louisiana when he was around two years old. My Air Force husband was away TDY at the time, but he knew I wanted a dog and had left a newspaper with a circled picture of a Humane Society featured pet. A female beagle puppy. Just what I was looking for. When I got to the Humane Society, she’d already been adopted… But if I was interested in an older dog, they had an unclaimed stray.

We saw Trooper and he definitely “had us at hello.”

Putting Trooper in the van while juggling four kids was a challenge and Trooper ran off with a woofed, “Goodbye, people.” He saw freedom and he was going for it, big ears flapping all the way! I gathered up my toddlers while my elementary school aged son ran back into the Humane Society to holler for help. They had to send a truck after Trooper and “re-capture” him for me. I thought for sure they would revoke my adoption papers for bad doggy parenting, but they assured us he was ours.

When we got Trooper home, we realized the full extent of why he ran from us. He’d been abused by whoever had owned him before he ended up at the Humane Society. Trooper would cower in the corner when we tried to entice him outside. My husband – home from his TDY – had to carry him outside for over a month before he trusted us enough to come when we called him. Yet Trooper never nipped or growled, and he adored our four kids. So we kept working with him.

Eventually, he learned to trust people, but he never would socialize with other animals. He ignored our cat (an orange tabby from the Humane Society in Ohio). Later when he was older and mellower, we hopefully welcomed home a puppy (Boston Terrier/Pug, Humane Society adoption from Alabama,) but he eyed Sadie with disdain and sent her scampering away with a gruff, deep beagle bark.

Time moved on, and over nearly thirteen years with us Trooper went from being a runner, to an ambler, and then the day finally came when we wished he could still run. His arthritis had gotten so bad he could barely walk. But we just weren’t ready to let him go.

My husband said it was because Trooper still wagged his tail. However I saw the pain in Trooper’s eyes that went far deeper than any tail wagging. I’d been his caregiver and he looked to me for help. So I worked with our vet and we came up with a plan for arthritis medicines, along with weight loss that gave Trooper some relief…. for a few months. Then he started giving me that look again. It hurts. I don’t understand.

My family still wasn’t ready to say goodbye. And that was okay. Putting a beloved pet to sleep is a decision everyone has to agree on. Each morning we checked out Trooper sprawled on his bed with a strange mixture of dread that he was gone… of bittersweet hope that he’d passed peacefully in his sleep.

Meanwhile, our dog Sadie craved the attention of other dogs in the neighborhood. So we decided to foster puppies for our local Humane Society here in Florida to give her some companionship, even temporarily. It wasn’t like Trooper would even acknowledge they were around. And yes, a part of me prayed it would help us let go of Trooper to see the circle of life’s beginnings and endings played out.

First into our home were four motherless, three week old Golden Retriever/Rottweiler mixes. Sadie adored them. Trooper ignored them. If they persisted he barked and sent them scampering away.

All but one. The tiniest of the litter was a determined little girl. Day after day, she worked her way closer to Trooper, her little eyes saying I just want to tell you hello… until finally, after about a week, he let her stay beside him.

She licked his arthritic paws in gratitude.

I’ll never forget the big ole happy sigh he gave as he snuggled up with his first doggy pal for a nap. I’d brought in the puppies for Sadie and even for us, without realizing that Trooper needed them – this one – more.

Shortly afterward, Trooper gave me that look again, but this time my family saw it too, and we decided it was time. Minutes after we made the call to the vet to schedule the appointment, Trooper stopped walking altogether. Throughout the weekend, my husband again carried Trooper outside as he’d done when we first got him. Life really is cyclical.

We said goodbye to Trooper on Monday, March 9, 2009. After we came home, I looked through some old pictures of Trooper, stopping at one of him with that little puppy tending to his knobby paws. We had all prayed so hard for some kind of healing for Trooper, and little did we know the part of him that really needed healing, the part that couldn’t break free of past pain to associate with his fellow canines, would be healed by a hello from three pounds of fluffy golden puppy.

Thanks to that sweet, tenacious little Humane Society blessing, Trooper went to heaven truly whole and healed, ready to run through the clouds at peace with his pack.