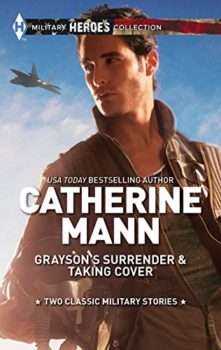 These two fan-favorite, Wingmen Warriors stories will leave you breathless!

Nothing frightens Grayson “Cutter” Clark. Yet the sight of Lori Rutledge has the air force flight surgeon almost dropping to his knees. After a year without her, Grayson is now her partner. Suddenly, rescuing a group of orphans from a war-torn country seems easy compared to keeping his feelings for Lori locked safely away…especially when she wants his surrender!

Dr. Kathleen O’Connell’s years in the air force taught her a thing or two about handling arrogant top-gun pilots. But there’s one hotshot flyboy who’s always gotten past her defenses. And now he’s her unwelcome partner—on the most dangerous mission of her career. Kathleen thinks she can keep him in line—maybe—but she’s not so sure about her own traitorous heart…